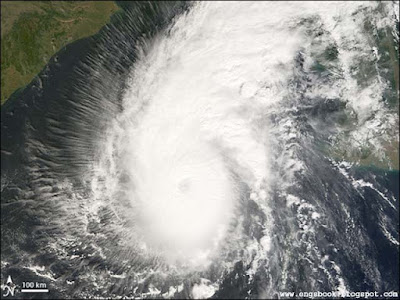 Bangladesh is very prone to natural disasters. SIDR, Every year, she is affected by various common disasters like floods, cyclones, tidal-bores, droughts etc. Among these, cyclone is the most devastating form which causes serious harm in our country. Cyclone is a tropical storm or atmospheric turbulence involving circular motion of winds. It is very common in Bangladesh due to her funnel shaped coast. Severe cyclones occur here almost i9n every year. Some of the destructive cyclone of the last century were those of 1970, 1985 and 1991. Very recently, on 15 November of 2007, a violent cyclone named SIDR affected Bangladesh. It was stronger than all other previous cyclone in Bangladesh. SIDR, according to Srilankan language means ‘eye’. It was given this name as the center of the cyclone looked like an eye. The SIDR was formed in the Indian ocean near the Andamans on 9 November. Being stronger, it moved towards the southern coast and then crossed  the north- eastern part of Bangladesh. The wind velocity of the SIDR was recorded 240 km/hr with a tidal surge up to 20 feet at some points. Even the diameter of the cyclone SIDR was far bigger in size than Bangladesh. It covered an area of 2 lakh and 50 thousand square kilometers. Twenty two coastal districts, specially, Barguna, Patuakhali, Bagerhat, Bhola, Barisal were affected most by the SIDR. In a matter of only a couple of hours, it left a trail of death and destruction of unbelievable proportions. Almost 10,000 people are believed to have died and many acres of crop lands have completely been damaged. Besides, 9 lakh families have been affected to various extent and nearly two and a half lakh domestic animals died. The eastern part of the Sundarbans has totally been disrupted. All the areas were flattened to the ground and communication system was suspendended. However, after these immediate effects, famine and epidemic broke out in the affected areas. The Bangladesh Govt. and also the general public came forward to rebuild the fates of the distressed people with all their abilities. At the same time, the international communities have also extended their hands of co-operation to rehabilitate the sufferers. Being a natural phenomenon, it is not possible to prevent cyclone. We can take some protective measures the lessen the sufferings of the victims. Both long and short term plants can be taken Govt. must take coastal green belt projects for a forestation. In addition, warming and preparatory measures have to be improve. More cyclone shelters have to be built. Finally, we should raise awareness in people to protect our lives and properties from the tremendous attack of cyclone. Cyclone like SIDR causes a huge loss to our country every year. 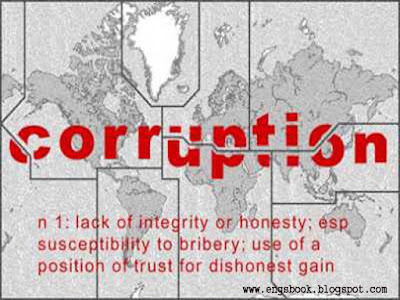 Corruption means adopting unfair means to achieve something being devoid of morality and by defying the rules and regulations of a country. At present, corruption has become one of the most alarming problems in  Bangladesh. According to the transparency international report- 2007 Bangladesh is the fifth most corrupted country in the word. There are a number of causes behind corruption. Unemployment, lack of good governance, lack of morality, the inadequacy of salary, political instabilities etc. have led to the expansion of corruption. In Bangladesh, corruption has engulfed the administrative, commercial, political and also social sectors. It has enlarged its paw in business sector too. Law enforcing agencies are the most corrupted department in Bangladesh according to the TIB report. The most usual form of corruption is bribery. However, there are other forms of corruption too. Such as unequal distribution of government funds, sharing of reliefs by officials, nepotism in public services etc. corruption games a nation. The country gets an undignified introduction worldwide. It minimizes the chances for foreign investments. At present, it has turned into an impediment to the development Of our country. Moreover, economic disparity amongst people has become cuter. Therefore, it is time for us halt and prevent corruption. Anti- corruption commission has already been formed to prevent corruption. Besides, it is necessary to upgrade the morality and human values of the people. Religious leaders, teachers, and parents can play an effective role in this regard. Media can also take a strong stand against corruption. In addition, good governance, the increase of job facilities and strict enforcement of legal rules can ensure prevention of corruption. Finally, we must create awareness amongst people against corruption. It is corruption which has hampered the development of our country. Therefore, all of us must raise a campaign to combat bribery and corruption for a better and corruption free Bangladesh.
thank you for all.
Tags:Recently Cyclone, SIDR